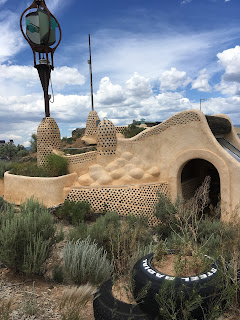 Last spring, my husband and I had a quick road trip getaway weekend in Taos, New Mexico. One of the local sights we visited is the Earthship development.

In the 1970s, Architect Michael Reynolds developed his "biotecture" designs for passive solar homes built of natural and upcycled materials. Empty glass bottles, dirt-filled tires, and many quirky design elements make the homes look like something from a sci-fi desert planet. The concept is still going strong, with Earthship homes all over the world. 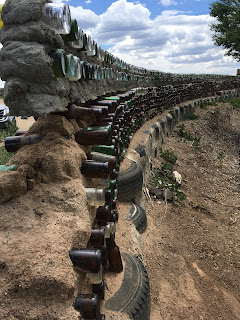 One alternative housing project from the same era which didn't fare so well was the Xanadu Home of the Future. The homes were built with polyurethane insulation foam, which allowed for cost-effective construction. Repeated spraying of the quick-drying material onto a large, dome-shaped balloon produced a five-to-six-inch-thick shell within a few hours.

The architecture emphasized ergonomics, usability, and energy efficiency. But what made them most different from the Earthships is that they were also the first automated, computer-controlled "smart homes."

In many ways, the Xanadu homes, of which only three were built, were ahead of their time. Office spaces envisioned integrating work with home life (sound familiar, anyone?). The "electronic dietitian" in the kitchen planned balanced meals, which could be prepared at a preset time. The walls of the family room were covered with television monitors. All of the fifteen rooms (including the health spa) relied heavily on computers and electronics.

So, why are we all not living in these awesome Xanadu future-homes? The technology, controlled by Commodore microcomputers, very quickly became obsolete. Interest in the homes peaked in the 1980s, and by 1996, only one of the three homes remained as a tourist attraction in Kissimmee, Florida. It was torn down in 2005.

I'm sorry I never had a chance to live the Jetson lifestyle in a Xanadu home, but maybe this is one of those ideas that will come around again. If so, sign me up for Xanadu 2.0.

Email ThisBlogThis!Share to TwitterShare to FacebookShare to Pinterest
Labels: blogging, Blogging From A to Z, environment, joy, Joy Project 2020, roadtrip