A to Z Joy: Whales


This may be strange for someone growing up in a land-locked state like Colorado, but I've always been fond of whales. From their whiskery chins to their iconic tail flukes, these giant marine mammals fascinate me.

Whales are divided into two groups based on their physiology for feeding: baleen (the strainers) and toothed (the grabbers). The current tally for whale species is 41. (Orcas are not considered true whales but belong to the same family as dolphins.) At almost 20 pounds/9 kilograms, sperm whales have the largest brains on earth--six times heavier than the average human brain. 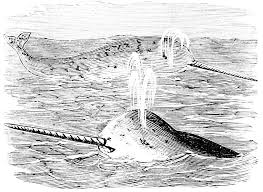 Narwhals, the so-called Unicorn of the Sea, are super interesting. The spiral tusk is actually an elongated canine tooth, which can be 10 feet long and have up to 10 million nerve endings inside.

I always assumed the name "narwhal" had something to do with the tusk, but the word comes from Old Norse and means "corpse whale," because their color resembles the skin of a drowned sailor. Lovely, right?

Many species of whales communicate by songs, which are not "built-in" like mating calls but must be learned. The longest and most complex songs belong to the male humpbacks. According to whales.org,


Their songs are beautiful, complex, and ever-evolving. Their songs can last for up to 30 minutes and feature various themes sung in a sequence that is common to all males in the same breeding area that year. The sounds they sing span 7 octaves, nearly the entire range of a piano. During the winter mating season, they repeat their songs over and over for hours at a time and gradually change them as the breeding season progresses. Each year a new song is produced.

Here's a short clip to help you chill out on a Monday:

Email ThisBlogThis!Share to TwitterShare to FacebookShare to Pinterest
Labels: animals, Blogging From A to Z, joy, Joy Project 2020