I am certain that the first time I saw a cairn, I didn't think it was anything other than a balanced stack of rocks. Since then, I have seen them in deserts and in forests and on beaches and in gardens. I have seen them in heavily trafficked areas and in what felt like the middle of nowhere. At some point, I learned that cairns, or human-made stacks or piles of stones, began as simple structures used to mark notable spots--burials, sites of astronomical significance, caches, and trails used by game and/or humans. They can be as large as a dwelling, or less than a foot high.

Cairns, both traditional and modern, are found all over the world, often in locations that have too few, or possibly too many, landmarks. They serve as guides for a designated route, or warnings to watch out for hazards best avoided. Some cairns have religious or mythological significance. In ancient Greece, they were associated with Hermes, the god of overland travel. In Portugal, they are known as moledros, or enchanted soldiers. An ovoo is a Mongolian ceremonial cairn used in Buddhist ceremonies. In South Korea, adding another stone to an existing cairn is said to bring good luck, a tradition thought to stem from the worship of San-shin, the Mountain Spirit. In Germany, a cairn is anthropomorphized as steinmann, or stone man.

Okay, cairns are fascinating, and I could go on about their wider significance in the world. But to me, a cairn is a simple confirmation that I am on a path to somewhere. (And because I can get lost backing out of my driveway, I need all the help I can get.) If I am alone on that path, a cairn is a sign that someone has been there before me. And because I am the type of person who would never knock a cairn down, I assume that someone will come along after me and be similarly reassured. (I do know that, in recent years, overzealous cairn-builders have wreaked some havoc in natural areas, but that is perhaps a subject for another time.)

Earlier in the summer, as I embarked on my virtual road trip, I felt that I didn't have a great idea of where I should be going. Honestly, I still feel that way. But I've realized that feeling a little bit lost makes me look even harder for clues. And the harder I look, the more likely I am to see something useful. A couple of weeks ago, for example, a member of my critique group made a general suggestion that really resonated with me. So much so that upon reflection, I decided she had put a metaphorical cairn in my path, steering me in a direction I had not considered. Maybe this course adjustment will not lead where I hope it does, but it has at least given me a sense of purpose for the next leg of my trip.

Cairns appeal to me because I love stones, but your preferred road markers may be signposts or flashing neon arrows or compass roses or dancing frogs. (I really hope it's dancing frogs.) As you go about your business, keep an eye out. When you spot one, either real or metaphorical, consider whether it confirms your direction or suggests an alternate route. Both options can be valuable. Make a choice, give it a shot, and if you don't like where you're going, turn around. The way back will be marked, too.

The Myth of the Perfect Summer 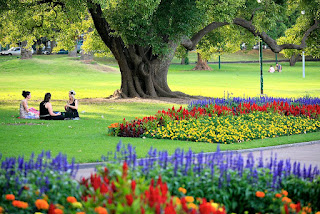 We expect so much from summer, don't we? Long, lazy, sunny days. Laid-back gatherings with family and friends. Time to both relax and check off all those items on the to-do list. Rain on our gardens but not our parades. Travel that is rejuvenating and also energizing. Music festivals and food truck festivals and Renaissance festivals and Irish festivals and wine festivals and...

Summer brings all those wonderful things, and more. But summer is nobody's patsy, and she has some tricks up her sleeve to make sure we don't get too comfortable. Mosquitoes, ticks, snakes, hailstorms, raucous neighbors, egg-frying heat, allergies, sunburns, houseguests that linger, and weeds. Oh, my heavens, the weeds. On a larger scale, many parts of the world are prone to extreme summer weather events that can be physically, emotionally, and financially exhausting.

Working parents must make arrangements to keep their school-aged children safe and supervised over summer break. Their stay-at-home counterparts feel obligated to fill the days with fun, enriching activities. Then there are the social media factors--Instagram and Facebook photos of exotic vacations, fabulous meals, and frosty cocktails that can make friends and followers feel as if they somehow missed the pleasure cruise. And let's not even get into the abominable concept of the "beach body."

Creatively, summer can be hit-and-miss. I have writer friends who are quite productive during the warmer months, but many of us who have extra writing time on our hands sit and watch those very same hands struggle to produce...something. Anything.

If you sometimes feel that you're off your game during the summer, you're not alone. Summer Onset Seasonal Affective Disorder (also known as SO SAD, Reverse Seasonal Affective Disorder, or Summer Depression) is a real thing. Some psychologists suggest a biological influence, with an excess of melatonin causing a decrease in serotonin. Others researchers point to a myriad of stressors that are magnified during the summer months: disrupted sleep, exercise, and diet; financial pressure; body image issues; and heat intolerance, to name a few.

Even though I don't have SO SAD (SO GROUCHY, maybe), I was relieved to read about it, because the middle of August and the impending back-to-school season is the time when I usually start kicking myself for all things I didn't accomplish. But this year, I'm going to give myself permission to accept that summer isn't perfect. And neither am I.

If you're north of the equator, how is your summer going?