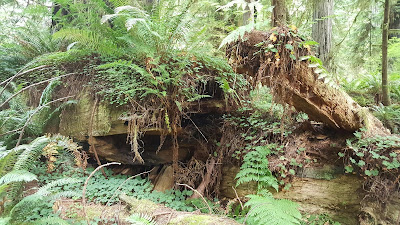 A month or so ago, I had the pleasure of visiting Northern California's redwood forests for the first time. The giant trees were all I had hoped for and more. As my family and I hiked around in the cool green shade well below the canopy, I felt as if I could be in another world. It seemed impossible that wildfires raged out of control less than a hundred miles away.

In the forest we also saw streams and ferns and banana slugs. And my younger son introduced me to the concept of a mother log, also known as a nurse log. (I prefer the former, so that is the term I will use.) A mother log is a fallen tree, which, through its inevitable decay, helps nurture the next generation of seedlings, as well as a whole ecosystem of plants, insects, and small animals.

The mother log collects water and provides a soft blanket of moss. It shares nutrients with new growth and, depending on where and how it fell, provides access to direct sunlight--a scarce, but necessary, commodity in a dense forest. There is also evidence that a mother log can offer resistance to pathogens. The decaying process may take hundreds of years, during which time the mother log actually contains more living matter than it did when it was alive and upright. It's such a fascinating transformation that in 2006, an artist in Seattle built a greenhouse around a rotting tree and thus turned it into an art installation. (It's called the Neukom Vivarium.)

We all have plans and ideas that fall flat. Sometimes quietly, and sometimes with a resounding crash that shakes the ground beneath us. It can be disappointing and unsettling. Even devastating. All that time and effort, all those resources, feel wasted. But what if we could look at these events not as failures but as a necessary part of the process for ensuring future growth? That brilliant endeavor which toppled so spectacularly might give rise to many more that will eventually take their place in the sun.

I have no trouble imagining potential failure. I have a harder time imagining the potential in failure. But I'm learning that even though it may be hard to see, it's still there. Just like the thousands of microbes, seeds, fungi, beetles, millipedes, and spores waiting to turn a fallen tree into a cradle full of future possibilities.