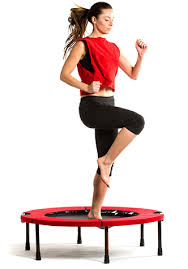 Don't worry, this isn't a relationship thing! I'm still happily married, as far as I know. No, this is rebound in the literal, physical sense: "to bounce back through the air after hitting a hard surface or object." Okay, now that I read it, what I actually did this week wasn't quite that dramatic. I wasn't crashing headlong into walls or anything. (But if I run out of things to do before the end of the year, I might have to resort to it!)

I'm referring to the rebounder, aka mini-trampoline. The fitness craze from the '80s actually predates that decade by quite a few years. Ed Russell invented the first mini-trampoline in 1938. He passed the prototype to his friend, Victor Green, who patented the "small trampoline" in 1975. Not long after, in 1980, a (now-famous) NASA study outlined the benefits of rebounding compared to running. (If you're ever itching to learn about gravireceptor stimulation, I imagine this study is a must-read.)

Many a rebounder trampoline might have been relegated to the garage after the '80s, but if the internet is correct, and we know it always is, there are still plenty of fans bouncing up a sweat these days. Benefits of this exercise are said to include muscle toning, cardiovascular improvement, stimulation of the lymphatic system, and better coordination and balance. Another big draw is that it is lower impact than running, which many of us who remember the '80s no doubt appreciate.

I like getting a bit of exercise before work, but now that it's darker in the mornings I'm having to find alternatives to my walk around the neighborhood. Rebounder to the rescue! Yes, they are again for sale on the internet and in sporting goods stores. The fancy ones are pricey, but the run-of-the-mill ones seem just fine to me. Maybe not NASA caliber, but then neither am I.

Every morning, I put on music and bounced for 15-20 minutes. I'm not embarrassed to report that it was really fun! Maybe it was all that lymph jostling around, but I felt like I started my days with more energy and enthusiasm. I'm sure I looked like a total spaz, so this is one of those activities that is best done solo. But that's not enough to keep it off the Take It list.