I Think That I Shall Never See... 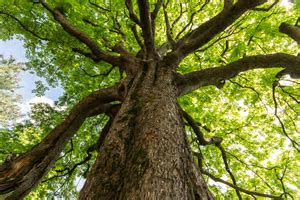 A poem as lovely as a tree.

That's the first line from Joyce Kilmer's 1913 poem, "Trees," which is one of the more familiar American poems, possibly because it is often parodied. (For example, "I think that I shall never see a dog who does not like a tree.") The original poem was an immediate hit upon publication in Poetry: A Magazine of Verse, and Kilmer earned a whopping six dollars from them for his efforts. Fun fact: I didn't know until very recently--as in yesterday--that Joyce Kilmer was a man. Huh.

In recognition of April being National Poetry Month, I spent the week reading (at least) a poem a day. My two sources were the internet, and a book entitled A Year in Poetry: A treasury of classic and modern verses for every date on the calendar. Yes, all 365 of them, plus Leap Day.

Some of the poems I read were brief, such as the 12-line "Trees." Others were longer and much more dense. James Dickey's "Falling" is 2,162 words inspired by an air accident in which a 29-year-old stewardess (this was some years ago) was sucked out of an airplane emergency exit while in flight. I do recommend it if you're looking to spend a bit of time contemplating very poignant imagery of a woman plummeting through the air to her death.

I've always liked poetry. I never fail to be impressed by how much poets can do with their carefully chosen words. So, I was surprised that I didn't enjoy this week more. Poem-a-day felt kind of like a school assignment, and I found myself procrastinating and then sort of grudgingly getting through it so I could say I did. It rather reminded me of a mental version of planking.

As much as I would like to say that I am the kind of person who would eagerly make room for a poem or two every day of my life, I just don't see that happening right now. For the time being, I guess I'll stick with my usual habit of reading fewer poems less often but enjoying them more.

This week's Take It or Leave It is an unexpected Leave It.

Email ThisBlogThis!Share to TwitterShare to FacebookShare to Pinterest
Labels: poetry, Take It or Leave It, TIOLI