Greetings from my writer's virtual road trip! I'm pleased to report that I reached my first stop, which was to complete the first draft of a speculative fiction manuscript I've had knocking about in my head for a very long time. I'm a slow and not very prolific writer, so managing to accumulate nearly 80,000 words of what my critique group has promised me is not total garbage feels like a big deal. So I spent a day or two congratulating myself.

Then the hitchhiker showed up. It played out something like this:
(twenty-something female wearing white t-shirt and jean cutoffs slides into passenger seat)
Hitchhiker: Hey, you mind if I ride along?
Me: (by nature, almost pathologically polite) Sure, if you want to. There's room.
HH: Where are we going?
Me: I'm figuring that out. I just finished the first draft of a manuscript--
HH: Cool! Tell me about it.
Me: (suddenly self-conscious) Uh, it's a sequel to a novel I wrote a while back. It takes place in a near-future Earth setting, after fires...burned...a bunch of stuff. (shuts mouth before rambling nonsensically about aliens and/or unicorns, neither of which appear in said manuscript)
HH: (brushes neon-pink bangs out of eyes) Okaaay... So, is the first book published?
Me: No.
HH: (raises pierced eyebrow) You spent months of your life writing a sequel to a book that's not even published yet?
Me: (dabs sweat from upper lip) I guess so.
HH: Why?
Me: I wanted to see if I could do the story justice.
HH: (takes a long drink of her Mountain Dew Big Gulp) So, writing is a hobby for you?
Me: Not exactly. I mean, I'd like for it to be more than that. But it's a tough business. And a lot of us who write fiction accept that we don't it for the money.
HH: Pffft. Tell that to Stephen King.
Me: (forces a smile) He's kind of a special case.
HH: And JK Rowling. And James Patterson. And Jodi--
Me: I get it. And I do have a published novel. I'm just not very good at selling books.
HH: You have a kid in college, right? And another one soon to be?
Me: (not at all surprised that she somehow knows this) Yes.
HH: Don't you think it's time to give up this writing thing and get a real job?
Me: Maybe. (bumps head on steering wheel while trying to curl up in fetal position)

This is the mental space I've been in for a week or so. Fun stuff, right? The good news is, now that I'm older and hopefully wiser, it's slightly easier for me to shrug off the negativity and see the situation with a less critical eye. Gaining perspective is helpful, too. Have you ever looked out the rear window during a road trip--after a long, gradual incline, for example--and been amazed at how far you've come without even realizing it? 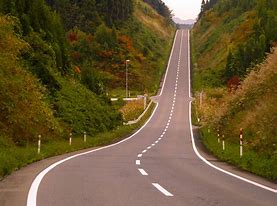 Even with perspective, I haven't been able to completely ditch the hitchhiker. But now at least she's taking a nap in the back seat, giving me some peace and quiet for figuring out my route ahead.