(Today's post appears in the book Write Away, A Year of Musings and Motivations for Writers, which I co-authored with Kerrie Flanagan.) 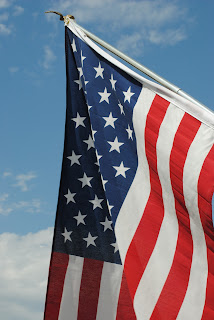 In the spirit of the day, let’s all take a moment to declare independence from something that’s holding us back in our writing lives. Perhaps you belong to a critique group which doesn’t meet your needs, but you’re reluctant to call it quits because they’re such nice people—and the snacks are delicious. Or maybe you need to put a little distance between yourself and social media. It’s fun, and it can be useful, but it can also be a huge distraction. Maybe I’m wrong, but I’m willing to bet that whatever your long-lost friend from third grade is doing these days, it’s not as important as your work-in-progress.

Today, I’m declaring independence from the word ‘never.’ I have nothing against the word itself—it’s a fine word that can have great dramatic effect. One of my favorite examples comes from the movie Batman Begins. The stately Wayne Manor, besieged by a gang of vigilantes, is burning. Bruce Wayne is trapped. After loyal butler Alfred (whose last name, by the way, is Pennyworth) dodges flaming debris to help rescue his billionaire boss, Bruce asks, “You still haven’t given up on me?”And Alfred replies, “Never.” Because Alfred is played by Michael Caine, it sounds like “Nev-ah.” Which makes it even better.

But many writers use ‘never’ in self-defeating ways. We say we’ll never finish our novels, never get published, never make any money, never get our big break. Used thusly, ‘never’ becomes a heavy anchor around the neck, and who has the desire or strength to carry that around all day? So I’m going to try and use ‘never’ only in contexts that I’m certain are true (e.g. I’ll never be 5’7” tall) or affirming (e.g. never give up). Take notice, all you negative nevers. I’m kicking you to the curb.

As for my old nemesis, chocolate, well, that truly is a case of never say never.

From what will you declare your independence today?