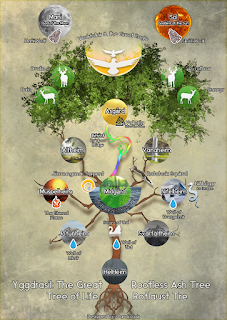 It's another world tree for today! Yggdrasill, the great cosmic ash tree, may be more familiar than yesterday's, as it comes from Norse mythology. It grows out of the Well of Urd, and its branches spread wide to cover the whole world and span the heavens. Of the three wide roots, one extends to the Aesir (the gods), another to the land of the Frost Giants, and the last into the cold, misty land of Nifelheim. That third root is constantly gnawed on by Nidhogg, the dragon.

An eagle perches at the top of the tree, with a hawk sitting between its eyes. Ratatosk the squirrel runs up and down the trunk, carrying messages between the eagle and the dragon, and stirring up trouble. Because, squirrels. Four stags wander among the branches, nibbling at the new growth.

Three women known as the Norns (the fates) live near a fountain of holy water (the Urdar-fount) under the third root. (In German folklore, the Norns appear as fairy godmothers or spinners.) The gods hang around down there, too. Every day, the Norns draw water and sprinkle the branches to keep Yggdrasill healthy. Two swans drink from the Urdar-fount, and from them all other swans are descended.

I just love the imagery: gods and fates and other assorted characters living together--sometimes peacefully, sometimes not--on and around a tree that brings balance to the nine realms of the Norse universe.