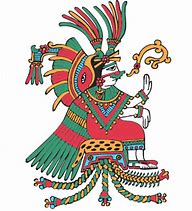 Xochiquetzal ("Precious Feather Flower" in Nahuatl) is the Aztec goddess of beauty, love, and the arts, including painting, weaving, sculpting, and embroidery. Patroness of lovers and prostitutes, she once seduced a priest and then turned him into a scorpion. (Maybe it was something he said.) She is also associated with flowers and plants, which is fitting because she was the wife of Tlaloc, the rain god. Her festival included offerings of marigolds.

In a plot twist reminiscent of the story of Persephone and Hades, Xochiquetzal was abducted by Tezcatlipoca, the malevolent god of night. He was perhaps motivated by the fact that she never showed her age, always appearing in the "bloom of youth." Talk about the ultimate trophy wife. Her hubby Tlaloc never came to fetch her, but Tezcatlipoca eventually let her go free. Xochiquetzal returned to the Aztec paradise of Tamoanchan, the home of the gods.

Humans could reach Tamoanchan after death, but it took some work. First, they had to pass through Xibalba, the "place of fright," where one would face rivers of blood, attack by obsidian knives, and underworld gods with cheery names such as Pus Master and Skull Sceptre. After getting through that ordeal, the dead could then begin the long, slow process of climbing their way up Xochitlicacan, the Tree of Life.

Thanks to the Aztecs, I was able to work three X's into today's post. Feeling pretty proud of myself :-)