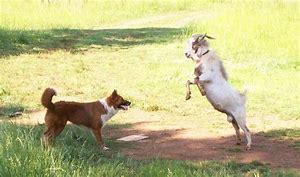 To the Lumba people of Zaire (Africa), Kalumba was the creator god who tried to keep Death from entering the world. His plan was to station a dog and a goat along the road and tell them to stop Death but allow Life to pass by. The two animals agreed, but before long, they got bored and started to argue. The goat left, and the dog fell asleep. Sure enough, Death came along, disguised as a pile of dirty laundry being carried by servants. The sleeping dog did not wake, and thus Death arrived in the world.

The next day, the goat returned to his post--maybe feeling remorseful for being a jerk, but maybe not, because you know how goats are. When Life came strolling along the road, the goat mistook her for Death and attacked her. Kalumba was not pleased, though really he only had himself to blame, because as far as I'm concerned such an important job shouldn't have been delegated to a dog and a goat. By this point, Kalumba had no recourse, as Death was already at home in the world. So, Kalumba closed the road and probably tried to pretend like the whole thing never happened.
at April 12, 2018