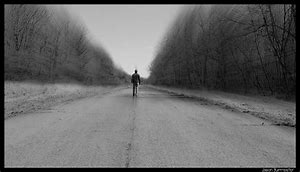 Though the story of a mysterious, disappearing traveler pops up in cultures around the world, the hitchhiking variant has become a classic American ghost story. The plot usually goes something like this: A couple of young men are driving along a deserted road when they see a young woman hitchhiking. They offer her a ride. She climbs into the back seat, says that her family lives a short distance away, and then falls silent. When the car reaches the house, the guys turn around to tell the girl she's home. But she has vanished. Confused, they knock on the front door and are told that the young woman they picked up disappeared/died in an accident years ago and has been seen hitchhiking on the same road ever since.

Sometimes, the ride may be to or past a graveyard. Occasionally, the ghostly passenger makes a prophecy or leaves behind personal property or other tangible evidence of his or her fleeting presence. In a version from the 1940s, an elderly woman who is given a ride foretells the death of Hitler before she disappears. For the Utah Mormons of the Church of Latter Day Saints, the ghostly traveler appears as a Nephite who aids stranded or injured travelers on lonely highways and also dispenses advice and/or foretells the future.

One of the most famous examples in this category of hauntings also known as "road ghosts" is Chicago's Resurrection Mary, who has been scaring motorists on Archer Avenue near Resurrection Cemetery since her death on that road in the 1930s.

Email ThisBlogThis!Share to TwitterShare to FacebookShare to Pinterest
Labels: Blogging From A to Z, folklore, legend