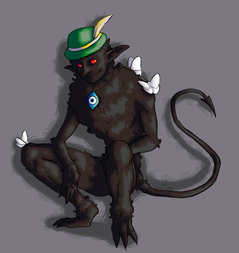 This is the German name for the magic hat ("camouflage cap" or "cap of concealment") that appears in both Norse and German mythology and legend. The cap made its owner either invisible or unrecognizable via transformation. In Wagner's Der Ring des Niebelungen, it is a helmet (tarnhelm) which is stolen from the dwarves by Loge/Loki.

The tarnkappe is also the must-have accessory for an Alp, a supernatural being in German folklore. In its earliest appearances, the Alp is elf-like, responsible for mischief, trickery, and deception. Later, the Alp is more of an incubus, which visits during the night to cause terrible dreams. (The German word for nightmare is alptraum, which means "elf dream.") The Alp is also known for its shapeshifting abilities, which is where the tarnkappe comes in. Using the power of the cap, the Alp was able to take the form of a cat, pig, dog, snake, or small, white butterfly. Interestingly, the tarnkappe remained visible. So, if you see one of these creatures coming toward you and it's wearing a jaunty hat, you should probably turn around and go the other way.

The tarnkappe was sometimes described as more of a mantle or cloak, and as such it pops up in Welsh folklore, Grimm's Fairy Tales, The Lord of the Rings, and, of course, the Harry Potter series.