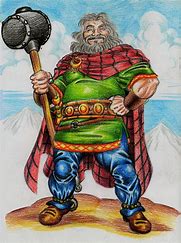 Tomorrow is T day for A to Z, but I decided to forego a post about Thor and instead use today to highlight a lesser-known thunder god. In Celtic mythology, Sucellos, whose name means Good Striker, also carried a hammer. But he was often portrayed not as a golden boy, but as a kindly old fat man with a long curling beard, who carried a cask and was accompanied by a dog. He is sometimes seen in the company of Nantosuelta, the Celtic goddess whose name is thought to mean "She of the Winding River" and/or "She of the Sun-drenched Valley." (Note to my friends and family: please feel free to start calling me either of those.)

A hammer was an important symbol in world mythology because it could represent a weapon of protection or a tool for craftsmen such as smiths, coopers, and masons. It is uncertain what Sucellos used his for, but he doesn't seem to have a terribly war-like reputation. All in all, he was apparently a strong but benevolent dude who was also a master multi-tasker. In addition to thunder, he was the god of: the sky, the underworld, abundance, protection, dogs, trees and forests, ravens, agriculture, hammers, and alcoholics.
at April 21, 2018