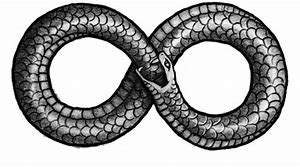 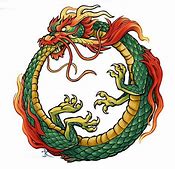 Ouroboros, a Greek word that means "tail devourer," is symbolized by a snake or dragon eating its own tail. In the shape of a circle or figure-eight (i.e. infinity), it's one of the oldest symbols in world mythology, dating back to ancient Egypt. It usually represents the cyclical nature of life and the eternal cycle of destruction and re-creation. Perhaps it goes without saying that because snakes periodically undergo the process of renewal as they shed their skins, they're a natural fit for this gig.

Notable ouroboros(es?) include the Norse serpent Jormangandr, who guarded the Tree of Life; the Aztec god Quetzalcoatl; and the serpent-like dragons of China. In alchemy, the ouroboros stands for the element mercury and the harmony of opposites. Due to its portrayal in black and white in that context, it is sometimes seen as an analog of the yin-yang symbol.

Email ThisBlogThis!Share to TwitterShare to FacebookShare to Pinterest
Labels: Blogging From A to Z, legend, mythology, symbol