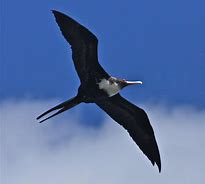 We haven't had a trickster yet, and this one comes from Polynesian mythology. In addition to being a tricky fellow, Iwa was such a skilled thief that he stole while still in his mother's womb--no mean feat, that.

In a contest with other thieves to see who could fill up a house with stolen goods in one night, Iwa waited until the other thieves fell asleep, made off with all their possessions, and filled up his house with them. Iwa also had a magic paddle which allowed him to row from one end of the Hawaiian Islands to the other in four strokes. I imagine that came in handy when the other thieves woke up in their empty houses and realized what had happened.

Iwa means thief in Hawaiian, and the Great Frigate bird that shares the name is known for stealing food from other seabirds.